Hamstring muscle injuries, like a “pulled hamstring” frequently occur in sports that involve sprinting, like track or basketball. Typically, these injuries respond well to simple treatments and don’t require surgery. Aside from these minor strains, fractures also arise in the hip and thigh region. The femur, which is the biggest and strongest bone in the body, requires a great deal of force to break, such as in a car accident. Hip fractures are more common and can occur from a fall or direct blow to the hip. Individuals with conditions such as osteoporosis and cancer are more susceptible to this type of injury because of their weakened bones. While it is possible that a particular fracture be considered stable enough to be managed by nonsurgical means, these injuries are often serious enough to warrant consideration of surgery.

If your hip has been damaged from arthritis, injury, or just normal day to day activities then hip replacement may be right for you. Hip replacements are one of the most common and successful surgeries in all of medicine since the 1960’s thanks to improvement in techniques and technology. 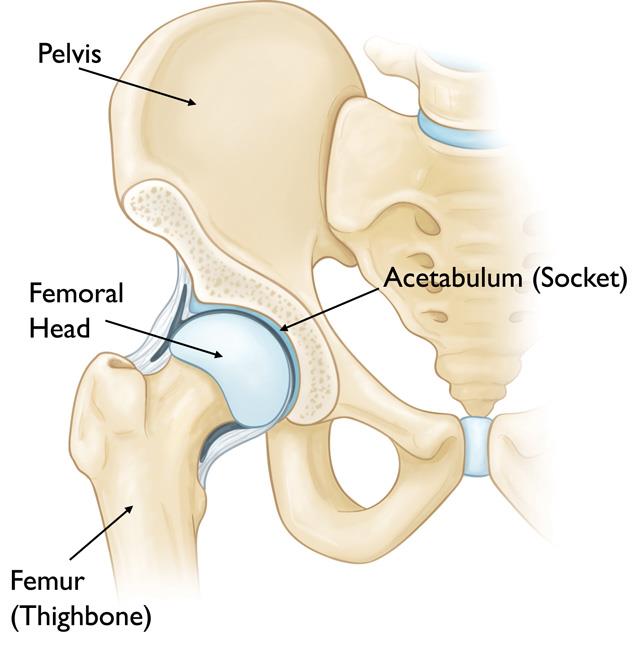 In a total hip replacement the damaged bone and cartilage is removed and replaced with prosthetics. During the procedure the damaged femoral head is removed and a metal stem is placed inside the hallow center of the femur. A ball is then placed on the top of the stem to replace the damaged femoral head. The socket is replaced with metal prosthetics along with spacers between the new ball and socket allowing for a smooth gliding surface.

Like total hip replacement, this procedure uses similar steps to achieve the same goal, with less recovery time due to a less invasive surgical process. Consider this a variation to the total hip replacement in that the approach uses a minimally invasive procedure in which the surgeon uses shorter incisions and/or changes the location of the incision to be better suited for less pain and shorter recovery. Whether this procedure is right for you can be discussed with your surgeon.

Just like any hip replacement surgery, the damaged bone and soft tissues are removed, but in this minimally invasive procedure, the surgeon makes smaller incisions that leave more muscles attached to the hip. Both the Traditional Hip Replacement surgery and the Minimally Invasive version of this surgery are viable options. Pros and Cons of Hip Resurfacing

15-20 years after the initial surgery implants can start to wear or loosen and may need a revision surgery. Most surgeons believe the revision surgery is easier after a hip resurfacing than in a total hip replacement since less bone is remove from the femur. Also the size of the ball in hip resurfacing is larger than in a total replacement which some surgeons believe will lower the chance of dislocating your hip.

With hip resurfacing there is a chance to fractur the femoral neck (area between the thighbone and ball). This is not possible during a total replacement since the femoral neck is replaced in the procedure. There is also a chance of metal molecules called ions reacting with local tissue causing pain and swelling that can lead to revision surgery. The ions can also enter the bloodstream which will have a systemic effect.